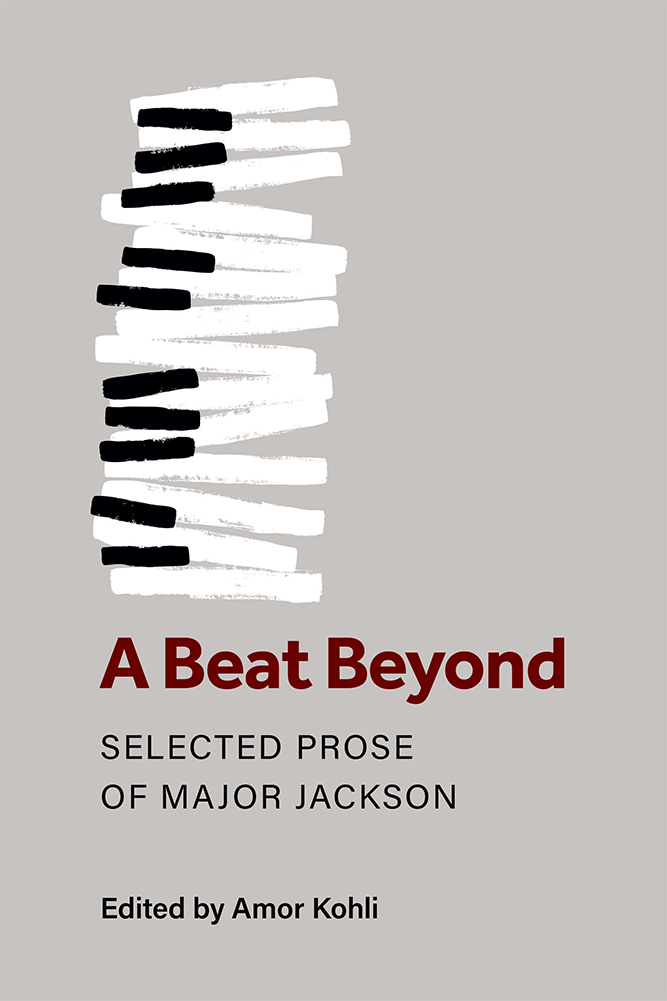 Foregrounding the possibilities of human song

In this collection of essays, interviews, and notes, Major Jackson revels in the work of poetry not only to limn and assess the intellectual and spiritual dimensions of poets, but to amplify the controversies and inner conflicts that define our age: political unrest, climate crises, the fallout from bewildering traumas, and the social function of the art of poetry itself. Accessible and critically minded, Jackson returns to the poem as an unparalleled source of linguistic pleasure that structures a multilayered “lyric self.” In his interviews, Jackson illustrates poetry’s distinct ability to mediate the inexplicable while foregrounding the possibilities of human song.
​
Collected over several decades, these essays find Jackson praising mythmaking in Frank Bidart and Ai’s poetry, expressing bafflement at the silence of white-identified poets in the cause of social and racial justice, unearthing the politics behind Gwendolyn Brooks’s Pulitzer Prize, and marveling at the “hallucinatory speed of thought” in a diverse range of poets including Mei-mei Berssenbrugge, Brenda Hillman, Afaa Michael Weaver, Forrest Gander, and Terrance Hayes. This collection passionately surveys the radical shifts of the art and notes poetry as a necessity for a modern sensibility.

“Ralph Waldo Emerson defined transcendentalism as ‘a little beyond,’ and that’s the spirit I find animating Major Jackson’s marvelous prose meditations on poetry and music. I admire him as a poet of the high lyric, the lyrical self, and these pieces emerge from that central driving impulse. Informed by history, dragged down by racism, Jackson nonetheless views art as a majestic vehicle of transport, a way to enrich, deepen, and free us, to soar.”
—Edward Hirsch, author of The Heart of American Poetry

“Gathering essays, talks, and reviews, A Beat Beyond offers readers a window into the poetics of a (pun intended) Major figure in contemporary American poetry. These crisp, highly readable pieces articulate the aesthetics informing Jackson’s editorial practices and sketch the readings, musics, lived experiences, and resulting insights that comprise the ‘lyrical self’ of a Black poet with Philadelphia roots.”
—Evie Shockley, Zora Neale Hurston Professor of English, Rutgers University

“Charles Baudelaire famously wrote ‘always be a poet, even in prose,’ and in his welcome new collection, A Beat Beyond, acclaimed poet Major Jackson explores subjects as expansive as Amiri Baraka, Elizabeth Bishop, vintage radios, and The Roots. Through expertly crafted and engaging essays, talks, reviews, and even liner notes, Jackson lyrically demonstrates his expansive intellect and how ‘poetry conveys the richness of living in the music of ourselves.’”
—Mandana Chaffa, Editor-at-Large, Chicago Review of Books

“Major Jackson’s A Beat Beyond constitutes an unrelenting deployment of his critical gaze; revealing with clarity and precision American poetry as a chaotic space brimming with glorious renewal, a praise song capacious and complex, inviting us to transgress the boundaries imposed by gatekeeping and groupthink.”
—Herman Beavers, University of Pennsylvania

“It is such a rare pleasure to read these prose pieces by one of our essential poets. His mind is capacious, generous, gracious, incisive, serious, and quicksilver in its ability to connect ideas and write with great subtlety and clarity about the lyric, about ethics, about race, about faith. We also get liner notes and writing tips, thoughts on radios and his travels to Africa. Read the book yourself to see how true it is when he writes ‘My freedom is the freedom of the spider weaving its orbital web.’ That is the mind you will meet in these pages, along with many great poets (some praised, some taken to task). Mostly we get to spend time with Major, as he thinks things through earnestly, brilliantly, companionably, originally. This book is a treasure, and a classic.”
—Matthew Zapruder, author of Father’s Day and Why Poetry

“What a gift, to have Major Jackson’s essays and prose reflections in one illuminating volume: to see this subtle, commanding poet’s mind at work, to follow the resonances of his inquiries into his lyric self and poetics, music, Black life, mentors, elders, and contemporaries. A Beat Beyond gives us the poet in full—as estimable poetic maker sharing his unfolding poetics, but also as editor, anthologist, essayist, and cultural critic.”
—Maureen N. McLane, New York University, author of My Poets

“Major Jackson is an eloquent poet of the natural world and a keen observer of the social world. In these essays he brings the hallmarks of his poetic voice to bear on a wide swath of twentieth-century American poetry. On topics ranging from racial appropriation to diction, from love to music to police violence, Jackson is an incisive and generous critic, gifting us an expansive account of his reading, along with the wisdom and the musical ear with which to read it.”
—Sonya Posmentier, New York University

“Major Jackson writes it like we need to hear it. You’ll get a sense of what that means right from the start, and it will only come clearer the more you read. Whether he’s unearthing the politics behind Gwendolyn Brooks’s Pulitzer Prize or examining the ‘hallucinatory speed of thought’ in the poetry of Mei-Mei Berssenbrugge, Terrance Hayes, or Brenda Hillman, Jackson writes with astonishing clarity and compassion, reminding us that the poem, however it’s been constituted, however boldly or obliquely it speaks to us, remains an ‘unparalleled source of linguistic pleasure.’”
—Derek Pollard, Series Editor of Poets on Poetry